We all have skin! The largest organ in our body that we all take for granted! It is protecting us from microbes and infections, helping us to regulate our body temperature and allows us to feel, touch and sense our surroundings. And it is doing all of that and more right now, even as you read this post, without you even thinking about it!

But what if your skin couldn’t even manage the most simple of tasks like hold together? What if you could barely touch anything, let alone move, without the risk of your skin tearing and ripping and becoming red raw? We all know how much it stings when you have grazed your arm or have that little niggly cut! But imagine if this was happening over most of your body and it couldn’t heal! And to make things worse, your skin was prone to blistering too! It must be pure agony! But this is the life of people suffering from a rare genetic condition called epidermolysis bullosa!

Who are the ‘Butterfly Children’?

No matter how you look at it epidermolysis bullosa (EB) is a horrid disease! A genetic disease that causes the skin to blister, break and tear off even with the faintest of touches! At best, it’s painful and disfiguring. At worst, it can be fatal! Those born with skin so fragile are called ‘butterfly children’ as their skin is quite simply as fragile as the wings of a butterfly!

EB is a disease that is usually inherited! For every gene that is coded in our DNA, we have two copies! For a lot of genetic conditions, you would have to gain two faulty copies of the affected gene  – one from your mother and one from your father! But in that case of EB, you only need one copy that is broken or mutated! But what genes are affected? In the simplest form of EB, genes called KRT5 and KRT14 which make the proteins keratin 5 and keratin 14 – but again you only need one of them to go wrong!

Our skin is made up of layers – the outer layer called the epidermis, the underlying layer called the dermis and the area where those layers meet is called the basement membrane. The epidermis is mainly made up of cells called keratinocytes – which express those proteins keratin5 and keratin14! What happens in these cells is keratin 5 and keratin 14 will bind together and form an anchor which helps keep the epidermis bound to the underlying dermis, and create a barrier that is protecting us from bacteria, viruses, UV radiation, water loss and more! They are literally holding your skin together. So, it will then come as no surprise that when these proteins aren’t working, like in EB, that the skin falls apart!

Currently there are no cures for EB! And the only treatment involves constantly dressing the skin. But this sometimes needs to be done several times a day and each change of dressing can peel more layers of skin away causing even more pain and agony. So, what is the answer?

A seven year old boy was admitted to a burns unit in Bochum, Germany with a severe case of junctional EB. This form of EB is different to the one I’ve already described as it affects a different gene and has more devastating consequences. In junctional EB, a gene called LAMB3 is mutated or faulty and this gene usually makes another anchoring protein called laminin. So, what’s the difference? The loss of this laminin protein is much more devastating as it is found a little deeper in the skin. While the keratin proteins I explained about before are found in the epidermis, or top layer, of your skin, laminin is found in that gap between layers called the basement membrane! In fact, laminin acts as the anchor in the basement membrane to which other protein, like keratins, attach to! So, as the laminin is non functional in the more severe junctional EB, there is nothing for the epidermis or top layer of skin to anchor on to, leaving the skin even more sore, even more painful and more open to infections! But this was the reality of this poor seven year old boy, In fact, about 80% of his top layer of skin was missing and fighting severe infections that left him fighting for his life!

But researchers in Italy may have come up with an approach that could offer hope to EB sufferers. A potential new treatment that uses stem cells!

A skin biopsy was taken from this young boy’s body and then in the lab, the stem cells were separated from all the other cell types of the skin! Scientists then had the task of repairing the faulty LAMB3 gene in these cells. This was done using a retrovirus that delivered a correct version of the gene, and using some fancy ‘cut and paste’ technology, it replaced the broken gene at the right point in the DNA. The mutated gene was fixed, and now it was time to grow some sheets of skin from these stem cells. The gene edited skin grew into sheets that ranged in size from about 20 inches to 60 inches, and was used to replace the damaged skin!

The study which was published this week in the journal Nature described how the technique appeared to work quickly, covered all damaged areas but is still working two years later! In fact, because this young boy’s new skin now has a functional laminin gene, these researchers managed to restore his basement membrane for the top layer of his skin to attach to! This key role in repairing the skin was identified to be a category of stem cells called holoclones! These cells could be an important target for future research in this area!

The beginning of the end for EB?

It is very unusual these days to see a published studied on only one individual, but this one is a little different! This is one of those studies that will determine where the future of the field will go! And I personally believe that this is the start of something special!

However, this treatment has only focused on one genetic mutation in particular, and I’ve already mentioned in this post alone that there are other genes that can become mutated and faulty that lead to EB. So, this particular treatment won’t be a cure for all EB patients. But it will provide key information to help many other sufferers of this awful disease! It could develop so that a child diagnosed with EB at birth can have their skin cells taken, gene edited and turned into a ready made supply of new sheets of skin to try and treat their condition and help any issues before they become more serious. We are no where near this stage yet! But it is incredibly promising!

And as for the young boy? Well, he is back in school, now leading a normal life and loves to play football! 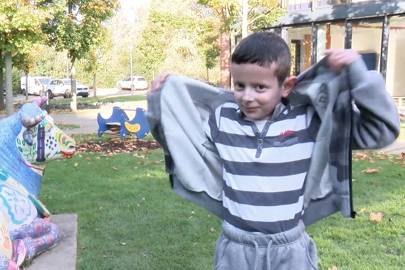