For one day each year they fill you with dread 🦇

About a thing that goes from the tips of your toes ☠, all the way to just under your hair 💀

We all have one that sometimes snaps, pops and breaks ☠

But is there more to a skeleton than just a skull 💀 and some bones ☠ ?

Okay, so my poetry skills leave ALOT to be desired! So instead, let’s get back to the science!

We all have skeletons in the closet right? Those deep dark secrets or guilty pleasures that you don’t want even your nearest and dearest to know about you! But forgetting about these for a second, how many skeletons can we find in our bodies?

Just the one right?

The one made out of 206 bones that helps us to protect our vital organs, gives us support and allows us to move, stores our minerals and produces our blood cells!

Are you sure about that?

Want to have another guess?

You’re sure it’s just the one yeah?

The answer is cells! There are trillions of different cells that make up our bodies and each of them has their own skeleton! It is called the cytoskeleton – which literally translates to cell skeleton – and like our own bony skeletons it helps to protect our cells, gives them structure, and helps them to move!

What is the cytoskeleton made up of? 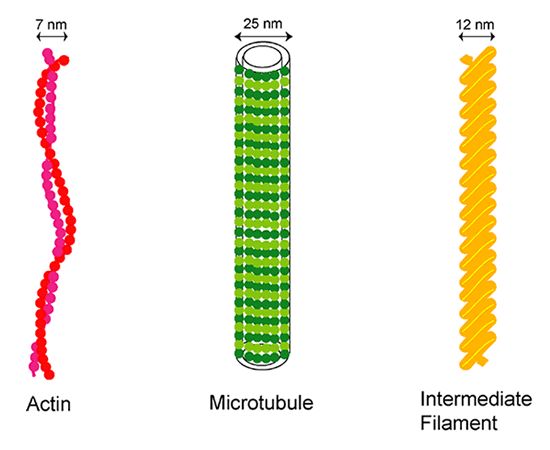 Microtubules tend to grow out from the centre of the cell all the way to its walled edges that makes it look like a creepy spider with more like 8,000 legs than 8! But each one of these filaments is like a hollow straw that is made up of repeats of two proteins called tubulin. The job of the microtubules is basic organisation in the cell – it keeps all those protein making factories – ribosomes – or energy producing parts – mitochondria – for example where they should be. They are forever changing in length! Those tubulin protein repeats are constantly added or removed in order for the filament to get longer or shorter!

Intermediate filaments are generally strong and rope-like. They don’t tend to change in length as much as the others and usually work alongside the fragile microtubules to give strength and support to our cells. Because if we didn’t have that structure, our cells would probably burst and ooze out its ectoplasm-like contents!

Actin filaments help our cells move, hold specialised shapes and divide! These are made up of long spiral chains of the protein actin and like the microtubules change in length often. When our cells are moving, the actin filaments grow and grow and causes a creepy arm-like protrusion at one end – almost like something is living inside and is stretching its arms to try and burst out! They push the edge of the cell forwards before the cells stick to this newly reached point before the actin filaments grow out again to help the cell get that little bit further along its path. So, basically actin is like our cell’s muscles helping them move from one destination to the next.

But it was actually in the muscles of our bodies that actin was first discovered! In our muscle cells, actin has a really important job! It slides across filaments of another protein called myosin! And this sliding of actin and myosin filaments across each other allows our muscles to contract! So, when you’re jumping out from the corner trying to scare someone, or perhaps running away from the fright of your life tonight – you can thank the actin in your cytoskeleton that allows you to do that!

What else does the cytoskeleton do?

We know that the cytoskeleton contributes to the architecture of the cell. Like our skeleton, it gives our cells shape, strength and mobility. It acts as the skeleton and muscles of our cells!

But it also has another role! It is a cargo transport system! It is the highways or shipping channels of our cells too! But like any transport system, it needs some carriers, and that is in the form of motor proteins – think of them like those huge cargo ships or trains travelling along their paths to bring their precious cargo from A to B!

I’ve already introduced you to one of these motor proteins – myosin – but there are two others:

Two of these motor proteins stick together and then attach to a microtubule and literally walk along the cytoskeleton pulling the cargo behind it! This feat truly amazes me and that it really looks like two little feet moving along is amazing! Almost like the motor proteins have a mind of their own!

In simple terms, the cytoskeleton is just like a big mesh found within our cells. Almost like, these tiny freaky cobwebs that are forever changing shape to suit the needs of the cell!

So, is there more than one skeleton 💀 hidden in our bodies?

One made out of bone and trillions of others in each of the cell’s in our body!

A bit of basic cell biology for you with a Halloween twist! Okay – so it was a little bit of a trick question, but hopefully learning something new was a treat!

Skeletons are for life, not just for Halloween 🎃🕸🕷!

If learning about skeletons just wasn’t enough Spooky Science for you today then check out last years post too about the zombie genes that we all have! Hope you enjoyed my extra spooky science special blog post today! Let me know in the comments below or if you have any other spooky science stories to share! Happy Halloween 🎃🕸🕷!

2 thoughts on “SpookyScience: Is there more than one skeleton hidden in our bodies?”